Mission: Ride 100km in a day, in challenging, windy conditions for Break the Cycle charity.

Six PEP staff members took the company’s active travel strategy to extremes on Sunday, 30th June 2019 when they joined over 200 other cyclists for a 100km ‘Break the Cycle’ charity ride. 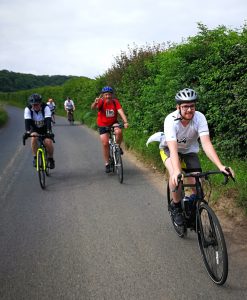 With this at the front of their minds, the PEP team took on the gruelling 100km route. It took them from Ashton Gate Stadium, across the new Swing Bridge, up the Portway, past Blaise Castle and over the Old Severn Crossing. They then went through Chepstow, up the St Briavel’s climb, down into Brockweir through the Wye Valley and into Tintern. They then climbed past the Fisheries, through Fedw Wood and up to Devauden Village, on to Chepstow Racecourse, back over the Old Bridge, down the Gorge, returning back to the start of the route, Ashton Gate Stadium.

Director at PEP, Andrew Kenyon explained, “The wind was a real killer. Going over the Severn Bridge was a first in terms of riding at an angle to go in a straight line!” He added, “The success and sense of achievement was down to all the hard work everybody put in, but especially Lewis Keenan and Julie Munro for organising and designing the kit.”

For James Perez it was a real triumph, never having ridden further than 50km in one stretch, “It was a great personal challenge. The long, never ending ascents were super tough but it was a case of mind over matter to tap into the almost depleted energy reserves when it really mattered. Great job by the PEP team to all make it back intact in this very well organised event.” 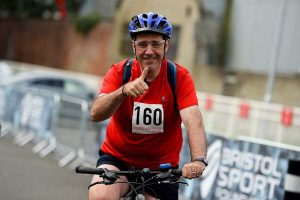 As tough as it was there were those who are clearly up for more – even more. Lewis reported, “A great day was had by all. Looking forward to 160km next year!” And the same for Toby Kenyon, “The hills were a struggle, but looking forward to doing the 160km ride next year.” Although Lee Stoney wasn’t committing to a distance, he still announced, “Tough going at times but still very enjoyable and well worth the effort. Looking forward to next year.”

Competitive lot! It’s going in the diary. Although they wouldn’t mind another challenge this year…